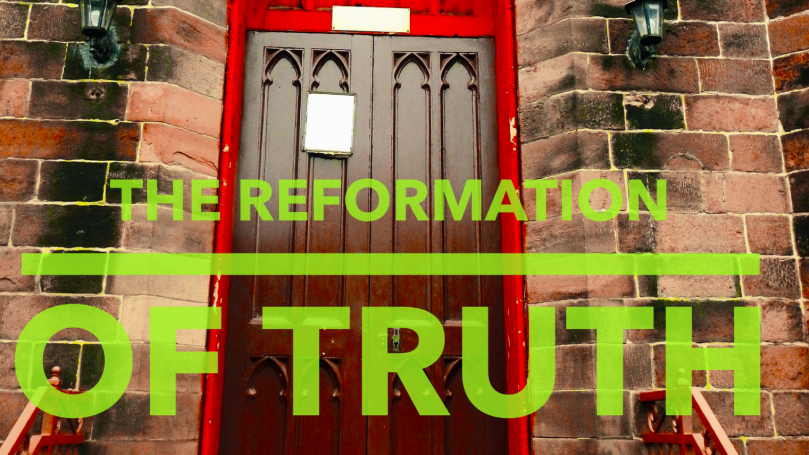 Have you considered how Martin Luther’s provocative act would have been received if it happened today? If Luther were living today and he wanted to confront what he saw as false teachings and distortions, what would he have done? He may have launched a blog post, or a YouTube video, or had a rant on Facebook live. Some would “like it,” others would post nasty comments about his words, and likely shame him for his bad hair cut. I think most would say, “That is good for him, but what gives him a right to push his views on others?” Today the very thought of Luther declaring sola scriptura (Scripture alone), is offensive. Our culture has declared sola hominis (man alone) or sola persona (person alone) as God’s Truth has been reformed into the image of each man.

What a difference 500 years makes! The hammer blows that would be heard around the world, as Luther nailed his 95 theses to the door of the Church at Wittenberg, seem unrecognizable in the context of our present day. The act that sparked the Protestant Reformation was the hammer blow of God’s revealed Truth against the distortions and false teaching of the Catholic Church in that day. Most Christians have little knowledge of the cost of those who have gone before us giving their very lives to fight for God’s Word to be accessible to all and for it to be rightly taught. Many were burned at the stake, imprisoned, tortured, and martyred so God’s Word and the truth of the Gospel would no longer be suppressed, controlled, and manipulated by popes and councils.

Martin Luther described the importance of God’s sovereign and wise plan to record His thoughts, through the apostles, in a written language for us. Luther explained it like this:

The apostles themselves considered it necessary to put the New Testament into Greek and to bind it fast to that language, doubtless in order to preserve it for us safe and sound as in a sacred ark.  For they foresaw all that was to come and now has come to pass, and knew that if it were contained only in one’s head, wild and fearful disorder and confusion, and many various interpretations, fancies and doctrines would arise in the Church, which could be prevented and from which the plain man could be protected only by committing the New Testament to writing and language.

God has recorded His Words for us as they create, control, and order His creation. They display God’s desire for us to experience abundant and meaningful life through the joy of knowing Jesus. Yet, it is truly amazing how Biblical illiteracy is so prevalent among those who claim Jesus as their Lord.

There are so many distractions and alternate messages, consuming our time and attention every minute of every day. In Martin Luther’s introduction of Psalms 119 he wrote, “In this psalm, David always says that he will speak, think, talk, hear, read, day and night and constantly—but about nothing else than God’s Words and Commandments.  For God wants to give you His Holy Spirit only through the external Word.”

The external Word is outside of us, like the God who spoke it. The external Word exists independent and transcendent from us. It authoritatively exposes and reveals our need to be rescued from our sin, brokenness, and spiritual death. Humans are not at liberty to shape it or remake it to what we want. Our culture is free to ignore it, disagree with it, or deny it yet it remains unchanging and ever-speaking.

As we recognize the 500th Year Anniversary of the Protestant Reformation we must be aware that propositional truth, like the 95 theses posted by Luther, pique little interest in today’s culture. As Luther said, “Let the man who would hear God speak, read Holy Scripture.” John Piper said, “The Word of God that saves and sanctifies, from generation to generation, is preserved in a book.”  Those who are searching for answers, with restless hearts need modern-day Luthers who are unafraid to publicly display and explain God’s Truth, regardless of the cost.

David Anglin is the Lead Pastor/Church Planter of CrossLife Church in Johnson City, TN.  He has a Mdiv in Biblical Studies from Mid-America Baptist Theological Seminary. He and his wife, Janet, have 5 children-whom they are educating, discipling, and living on mission with.